Memory foam is polyurethane with additional chemicals to increase its viscosity and density. It is often referred to as “viscoelastic” polyurethane foam. Polyurethane is synthetic and is made from petroleum products. It can contain 61 different chemicals more than a gallon of petrol contains!

Out-Gassing. The chemicals in polyurethane foam (Memory foam) outgas into the air. These toxic chemicals are called VOCs, or volatile organic compounds. Some of these are documented carcinogenic and mutagenic compounds. Common petroleum based chemicals have been clearly shown to have the ability to weaken or damage the immune and nervous system. Autoimmune disorders have also been linked with exposure to petroleum-based chemicals and have been found to be the underlying cause of many common health problems today (soft tissue damage, organ and brain damage, arthritis)

Memory foam is dense foam and traps body heat. This is why it’s so hot to sleep on.

Memory foam mattresses are the most exchanged/returned mattresses.

“Memory foam is a resin made with chemicals such as Toluene Diisocyanate, described in Environmental Protection Administration as being extremely toxic if inhaled.” Dr Bolte

“However members are encouraged not to recommend the use of viscoelastic foam…and there may be potential dangers from indentation and consequent restriction of breathing.” Peter Davis – OBE FCIM F.Inst.Pkg – Director General of The British Plastics Federation

Memory foam was developed in the late 70’s by a group of chemists at NASA’s Ames Research Center. But the Program never intended to use space foam for bedding. It was developed for astronauts’ seats, not for sleeping. The original NASA foam was never suitable for sleeping because it broke down in time and lacked the comfort needed to make a good mattress. Due to the unpleasant fumes that were potentially dangerous in the confined areas of a spacecraft and other issues, memory foam was never actually used inside space shuttles!

They have been around since the 1800’s, and little has changed in their manufacturing over the past 100 years. One of the biggest complaints of innerspring mattresses is that their comfort lasts only a few years, until the padding layers begin to compress. This creates pressure points, and the inability of innerspring beds to contour effectively can distort spinal alignment leading to back pain. Innerspring mattresses are also prone to collecting dust mites, allergens, mould and mildew in the empty spaces inside. This created issues for those suffering from asthma or severe allergies. Innerspring beds receive the lowest average ratings from owners.

Metal coils pose “Antenna Risk”. Metal Spring Mattress amplifies Electromagnetic radiation (EMR) and Electromagnetic Field (EMF), which can leads to a poor sleep and a range of other symptoms including – headaches, hyperactivity, depression and fatigue, eyestrain, muscle cramps and even nightmares and cancer.

Other biological problems associated with EMF fall into two major categories; the brain (behavioural abnormalities, learning disabilities, altered bio-cycles and stress responses) and growing tissue (embryos, genetics and cancer). The body during sleep must be more alkaline, and high EMFs lead to acidity. Acid chemistry in the body contributes to more disease and cancer.

“When you consider that you spend one-third of your lifetime in bed, it’s easy to realize the level of hazard you may be inadvertently exposed to if you’re sleeping on a metal coil-spring mattress that literally bathes you in electromagnetic radiation.” Dr Mercola – 18/08/2010

“The melanoma epidemic is a result of the modern man-made environment that forces us to live and sleep in invisible but still unhealthy electromagnetic smog.” US National Library of Medicine National Institutes of Health – 05/03/2013 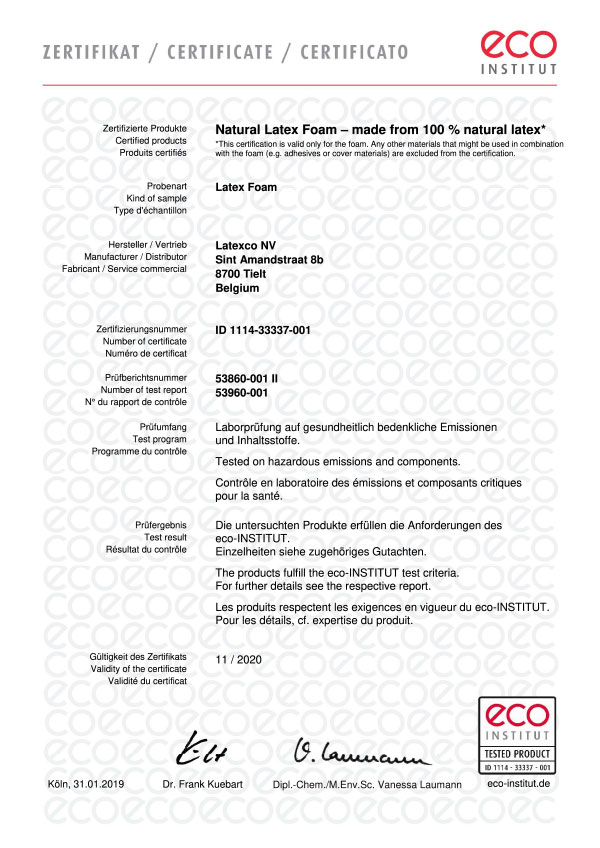 Care instructions for our mattresses

Our mattresses are two sided and you can use both sides. The side with the big product sticker attached to the cover is normally the top, you can however use the other side as well.

Take extreme care whilst moving the mattress as the foam fillings can tear if grabbed or pulled on corners or edges.

Rotate the mattress from top to bottom and flip it over once every 3 months, this will ensure even wear and tear and will prolong its lifespan.

You can air the mattress every time you change your bed linen to keep it fresh and dry.
Never use detergents or chemical cleaners on your mattress. This can adversely affect not only the fabrics but also the fillings inside.

The mattress must be kept dry. If there is a risk of accidents with fluids, please use a waterproofed mattress protector.

If you spill something on your mattress and it gets wet, wipe the liquid with a cloth, remove the cover and air the mattress core till it is dry. You can then use the mattress again.

Our covers are zip-off removable and washable at 20 maximum at 30 degrees. Do not wash the cover at a higher temperature as it may shrink. Do not tumble dry and do not dry clean it.

The mattress can not be used on boarded, closed or not adequately ventilated bed bases or on the floor as the lack of ventilation may lead to mould and mildew build up and invalidates your guarantee. We recommend slatted bases. The gaps between the slats should be between 2 and 4 inches wide.

The mattress is designed for sleeping on and constant sitting on the edge can cause damage and place undue stress on this area of the mattress.